As it was mentioned in a previous chapter (https://antioxidantsgroup.wordpress.com/2013/06/21/origin-of-the-oxygen-in-the-earths-atmosphere-a-necessity-to-live-a-threat-to-the-living-organisms/), the aerobic metabolism facilitated the evolution of the multicellular organisms. The life with oxygen provided benefits in terms of metabolic diversification, since there are more than 1000 metabolic reactions which use oxygen and which are specific to the aerobic metabolism (Raymond y Segre 2006; Halliwell 2006; Falkowski 2006).

The use of oxygen entails a greater energy production; however, the oxygen is a toxic molecule since the generation of reactive oxygen species (ROS), derived from its metabolism, cannot be avoided. In view of this situation, different strategies were developed to avoid the oxygen toxicity, from the occupation of anaerobic niches to develop systems which control the distribution and concentration of oxygen. In plants, the production of ROS poses a particular problem; on the one hand, by its inability to move to safer environments, and on the other hand, because the photosynthesis process, essential in plants, favours the ROS generation.

Evolution in the antioxidant systems in plants: the ascorbic acid or vitamin C
In a recent revision (Gest et al., 2013), it is emphasised the necessity of the evolution and development of antioxidant systems to control the ROS production. These authors mention that a good antioxidant must provide protection against the oxidation (loss of electrons) by the transfer of electrons to the oxidised molecules in order to reduce them and restore a non-toxic and non-oxidised environment. Moreover, a good antioxidant must not be toxic in its oxidised form and it must be able of recycling or regenerating itself to recover its electrons from another source. In this sense, a molecule which plays a paper of excellent antioxidant is the ascorbic acid, also known as vitamin C (Foyer y Noctor 2011).

This molecule can neutralize directly ROS such as hydroxyl radicals (.OH), hydrogen peroxide (H2O2). superoxide (O2.-), singlet oxygen (1O2), but it can also repair oxidised organic molecules, such as alpha-tocopherol o vitamin E. The oxidised ascorbate form, the monodehydroascorbate radical, is a very stable molecule which can be turned into another non-radical molecule, the dehydroascorbate (Smirnoff 2000). Ascorbate can be easily regenerated by the action of specific reductases and with the help of other molecules such as the NADH, the NADPH or the GSH on the so-called Ascorbate-Glutathione cycle (ASC-GSH) (see https://antioxidantsgroup.wordpress.com/2013/07/12/antioxidant-defense-mechanisms-ii-enzymatic-mechanisms/).

But ascorbate is not only an excellent antioxidant, it also fulfils some functions in plants. For example, it is the great protector of the photosynthetic apparatus; it participates in the flavonoid biosynthesis, including the anthocyanins, and the ethylene and gibberellins biosynthesis. These compounds play an important function in the development and fruit ripening. Other processes in which it participates include the growth and development, the progression of the cellular cycle, seeds viability, and the germination.

Ascorbate is not as broadly present as its antioxidant “brother”, the glutathione (GSH). In this sense, ascorbate is absent in bacteria; while they can use it as a carbon source, they cannot synthesise it (Yew y Gerlt 2002). Cyanobacteria, precursors of the chloroplasts, have very little ascorbate or else it is absent, whereas higher plants gathered more ascorbate in all its cellular compartments and in all its organs. The fruit is a source of vitamin C particularly important that you should to consume due to its huge benefits for health, since human beings cannot biosynthesize it. 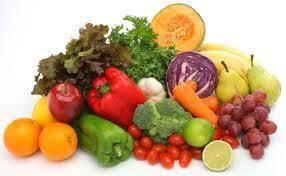 José A. Hernández Cortés. Research Scientist (CEBAS-CSIC)
In the last chapter, we described non-enzymatic antioxidant defense mechanisms (https://antioxidantsgroup.wordpress.com/2013/07/04/antioxidant-defense-mechanisms-i-non-enzymatic-mechanisms/), so now we are going to talk about enzymatic antioxidants.
ENZYMATIC ANTIOXIDANTS
– As far as it is known, the only enzyme involved in superoxide radicals elimination is superoxide dismutase (SOD). In fact, there are three different isoenzymes depending on the metal present in their active site (Mn-SOD, Fe-SOD or Cu,Zn-SOD). This group of metalloenzymes catalyzes the dismutation of superoxide radicals to H2O2 and O2:

– H2O2 can be directly removed by the action of the enzyme catalase or by the action of ascorbate peroxidase (APX, that uses ascorbate as electron donor), peroxidases (POX, enzymes that are abundant in cell wall and in vacuoles) which remove H2O2 using different phenolic compounds as reducing power; glutathione peroxidase (which removes H2O2 and hydroperoxides employing GSH as reducing power) or peroxiredoxins using different reducing molecules.

The enzymes APX, GR, MDHAR and DHAR act in a coordinated way in a cycle called ascorbate-glutathione (ASC-GSH) cycle whose function is to eliminate H2O2 and regenerate the non-enzymatic antioxidants ascorbate and GSH.

Both in our organism and in plants, when the generation of ROS overcomes antioxidant defence mechanism, an oxidative stress occurs at cell level which can lead to cell death. All this is associated with some pathology in human beings as cancer, cardiovascular diseases, Alzheimer, Parkinson, sclerosis, among others. 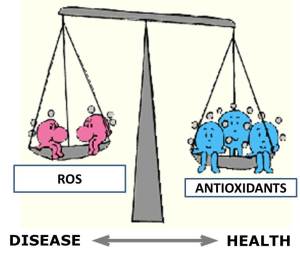 But as we have already mentioned, (https://antioxidantsgroup.wordpress.com/2013/06/27/reactive-oxygen-species-friends-or-foes/) ROS are not only harmful molecules for cells, they are also used as messengers in signalling cascades in a great variety of cell processes. For example, in plants, ROS act as second messengers in vital processes as vegetative development and defence mechanisms. In animals, platelets, which are involved in injury healing and blood homeostasis, release ROS to recruit more platelets at the injured areas. They also establish a link to the adaptation of immune system through white blood cells recruitment. Immune system also uses the toxic effects of ROS making them the central part of its mechanism to kill pathogens.

Therefore, the function of ROS in metabolism is dual; they are toxic for cells when they accumulate in excess, but at low levels it has been proved that they can function as bio-signalling molecules.

José A. Hernández Cortés. Research Scientist of the CEBAS-CSIC
As we have already mentioned in previous chapters, reactive oxygen species (ROS) are a consequence of aerobic metabolism (https://antioxidantsgroup.wordpress.com/2013/06/27/reactive-oxygen-species-friends-or-foes/). In vegetative tissues, approximately 1-2% of total oxygen consumption drives to the creation of ROS in normal conditions. This percentage increases when plants are subjected to stress conditions such as salinity, drought, cold stress or high temperatures. Nowadays, we know that damages produced in plants under stress conditions are mediated, partly, by an increased production of ROS at subcellular level. It has been proved that ROS are generated in different cellular compartments as mitochondria, peroxisomes, chloroplasts, cytoplasm or in the extracellular space, kwon as apoplast.
In summarized form, we can say that the superoxide radical (O2.-) is formed in chloroplast, mithochondria, peroxisomes and plasma membrane. In these compartments the O2.- is quickly dismutated to hydrogen peroxide (H2O2) by the action of enzymes called superoxide dismutases (SODs). Furthermore, the H2O2 is produced by the action of peroxidases in the apoplast, and it is formed as a reaction product by the action of other enzymes in different compartments (glicolate oxidase and xanthine oxidase in peroxisomes, acyl-CoA oxidase in glyoxysomes, amine oxidase and oxalate oxidase in apoplast).
Singlet oxygen (1O2) is formed by transferring energy from excited chlorophyll to oxygen in chloroplasts. Finally, hydroxyl radical (.OH) could be formed by the reaction of O2.- and H2O2 in presence of transition metals (such as Fe2+ or Cu+).
Plants have an enormous variety of defense mechanisms, including enzymatic and non-enzymatic defense mechanisms, in order to cope with the over-production of ROS. They are the well-known ANTIOXIDANTS. 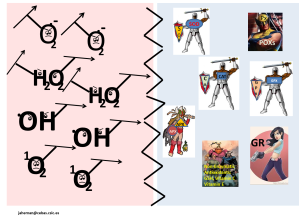 In the next chapter we are going to talk about the Enzymatic Antioxidants Defense Mechanisms.